The Conviction of Sight

Any good detective understands that the world of facts is open only to the disciplined observer. This type of observation is pertinent to art as well, in both its viewing and creation. The artist and viewer must train their eyes to see the meanings in the world.

The current show at Gallery Arcadia focuses on the act of observation in paintings and sculpture. The exhibition includes recent work by Chicago artist Tim Lowly under the title "Proof," and a group show titled "What We Have Seen" which was organized by Lowly and includes 8 other artists from Chicago (Meltem Aktas, Dean Bienvenido, Steve Carrelli, William Frederick, Rive Lehrer, Joel Sheesley, Jeff Thompson, and Tim Vermuelen) whose work is connected through an attention to figuration.

"What We Have Seen" implies that these artists are "recipients" of certain sights and images. But these artworks are more than mere sights – they are disciplined, formal constructions of reality which embody distinct convictions. 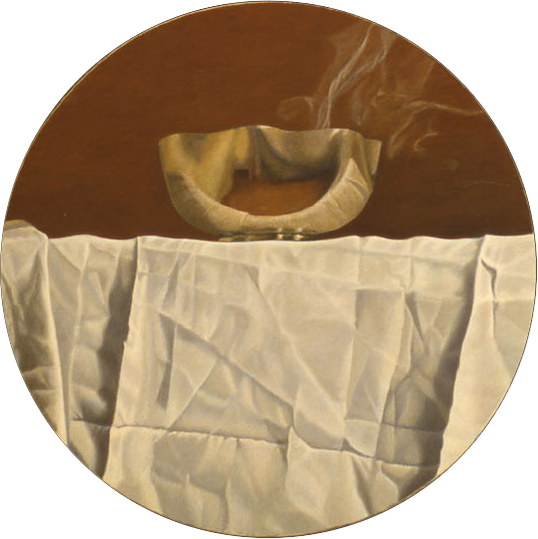 One of the more compelling images in the show is "Signal," a small, egg-tempera painting by Steve Carrelli. This simple image consists of a shiny metal bowl with wisps of smoke rising from it on the edge of a table with the tablecloth cascading down and taking up most of the picture plane. The intricate attention and detail in this image is delightful as the careful rendering of the folds and reflections in the bowl abstract and flatten slightly. The wisps of smoke become a shifting focal point as the form and function of this image merge.

The tiny painting/drawings of Meltem Aktas work in a similar quiet mode with slightly more emphasis on line to convey the movement and evidence of observation. This small group of images works best as a whole, as the images repeat delicate lines and shapes and attach together like a visual narrative.

Riva Lehrer's images also take on a serious level of content through their observation. By using herself as the subject, her images are powerful statements of identity and the relationship of "self" to "body." Her most effective image is the mixed media on paper "Circle Story #4: Self Portrait." This image consists of two panels, one showing her head and shoulders, the other (about two and a half feet below on the wall) her legs and feet. The gap between these images is unnerving as we attempt to imagine the missing torso. A close look reveals what appears to be Hebrew lettering on her forehead, perhaps connecting the act of self-picturing to the clay "golem" of Jewish mysticism who was brought to life by a Hebrew inscription on its forehead.

The paintings of Tim Vermulen take the show on a humorous turn with simple paintings of figures in quirky narratives. "The Four Elements: Fire" is the most intriguing with a figure glancing toward the viewer while pulling back a curtain on the window so we can see the house burning next door. The simple style of these images gives this otherwise grave scene a refreshing charge of energy.

Other works of note in the show are the large ceramic head and busts by Jeff Thompson, the facile though somewhat empty realism of William Frederick, the elegant brushwork of Joel Sheesley, and a few heartfelt paintings by Dean Bienvenido.

"Proof" is a collection of paintings and objects by Tim Lowly. These works follow a similar code of realism to "What We Have Seen" and contribute to the discussion of figuration and the conviction of observation. With craft and conscience, Lowly makes art objects that resonate with both the eye and the mind, allowing a depth of vision to deepen into insight.

In one of the partitioned rooms of gallery Arcadia, one encounters two life-size casts of Lowly's daughter, Temma, on the floor. These ghost-like sculptures dramatically affect our perceptions and reorient our understanding of the body to that of one who is severely disabled.

On the east wall of this room are a line of ceramic bowls, each with a small, circular painting of a fragment of a face with an eye (presumably belonging to Lowly's daughter). As the viewer looks from left to right, the painted eyes shift placement and read like a slow musical score with subtle variations and inflections.

A small painting of Temma's head (from the side and facing upward) is placed up high on the north wall, almost out of reach. This beautiful image contrasts with the gravity of the figures on the floor by adding a mysterious sense of lightness and ascension. Text fragments are used in conjunction with these objects as a subtle narrative device relating conceptually to notions of "proof." These words generate an epistemological liturgy of the senses: "What you touch", "what you dream", "what you see", "what you remember"... The only thing that does not work is the way the text is presented as hand-written cursive on plastic, horizontal plaques--a small detail which unfortunately takes away from the continuity of the work in this room. 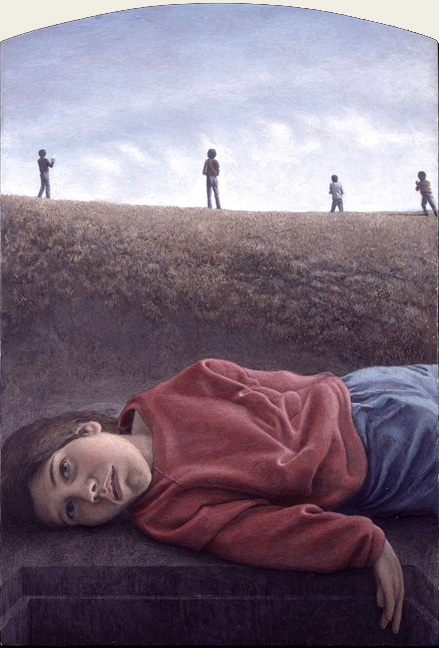 Out in the main gallery space is the painting "As the Earth Waits," a medium-sized portrait of Temma. The oddity of this work is that the figure and the background are the same tonality, making her appear to be camouflaged or created out of the same material as the ground she is resting upon. The illusion is superb and resembles the subtleties of a relief sculpture.

The exhibition title painting, "Proof," is a dark image of Temma lying on the ground next to a rectangular hole. In the far background, one notices tiny childlike figures running. The transition of space between foreground and background isn't as smooth as it could be, yet the narrative of life and death is by itself almost enough. 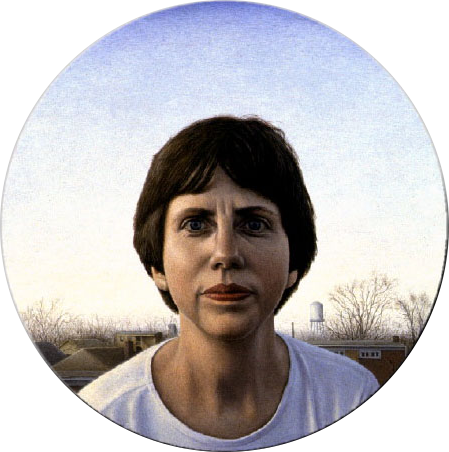 One of the most striking images in this exhibition is the painting "Plenty" of Tim Lowly's wife in front of a Chicago skyline. The circular portrait is placed so that the face of the figure is close to the average viewer height. This image manages to encapsulate what Lowly does best: present to the viewer an "other," a presence that they are forced to deal with either in terms of difference or sameness. Confronted by the figure's gaze, we respond automatically and even look away, as if we were facing a real person. Discomforted with the way we see, we work to see differently – perhaps even with hope and humility.