The following review was part of a larger article titled "Household Poisons" that also reviewed an exhibition of work by Jennifer Krauss. The entire article, as well as additional articles by Fred Camper and others, can be purchased at The Chicago Reader Archives.

Steven Carrelli's three pencil drawings, on view with six of his paintings at Wood Street as part of its "Ecstasy" exhibit, also refer to domestic interiors: they show the bare details of a room, a drapery covering a chair or part of a wall – it feels as if someone has just moved out. But while Carrelli hints at a narrative, the home is not the locus of charged meanings; rather it's drained of any obvious human drama. If Krauss's work conjures up the real or imagined past, Carrelli's work creates a mood of meditative stillness. In fact he counts "stillness and silence" as "among the fundamental characteristics of painting."

Hiding Place depicts a sheet or drape on a bare wall hanging on a single hook and covering less than half of a rectangular niche behind. A row of holes is revealed in the rear wall of the niche; the one on the right is filled with an empty hook. These details hint at past activity, but there's no sign of what that activity might have been. Nor does Carrelli aim for a full, three-dimensional modeling; the fabric's folds and shadows barely hint at depth. This spare scene never suggests a theater stage, despite the curtain, or even a space one can imagine walking through. Instead one focuses on its tiny pencil marks and notices that the whitest parts of the fabric and the wall are identical because they're simply the white drawing paper – a kind of blankness underlies this image.

Carrelli's paintings are in a way even sparser despite their color. They don't depict the illusionistic space of a room but instead show leaves and seeds against simple backdrops. Delta shows a brown, triangular leaf against the folds of what appears to be a rumpled bedsheet. The stem seems to rise some distance from the sheet before meeting the fabric at its tip, a divergence that provides the painting's main "drama." 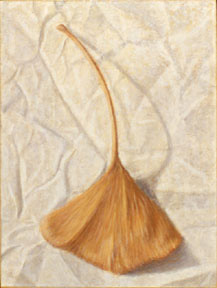 Carrelli, 28, a Chicagoan currently in Italy on a Fulbright, paints in an old medium, egg tempera on board, most often identified with early Renaissance panel painting. He told me he likes its "delicate, luminous color – it's very limpid." The colors don't go "from the relative light to the really deep dark" of oil paint; instead they go "from a really light light to just about a medium dark, which is an interesting value range for me; I think it's ethereal." While he hasn't yet attained the near-miraculous transparency of the greatest panel paintings, Delta's gentle colors admit none of the aggressive physicality common in painting; one feels the work is less about its colors or the single leaf it depicts than about where looking at it might take one. In fact there's a meditative aspect to working with egg tempera: you can't blend colors because, unlike oil, egg tempera dries quickly.  It involves, Carrelli says, "a slow process of laying down hundreds or thousands of marks in a day and going over them with finer marks the next day and the next day...a process akin to the kind of looking that I really think about in the paintings." 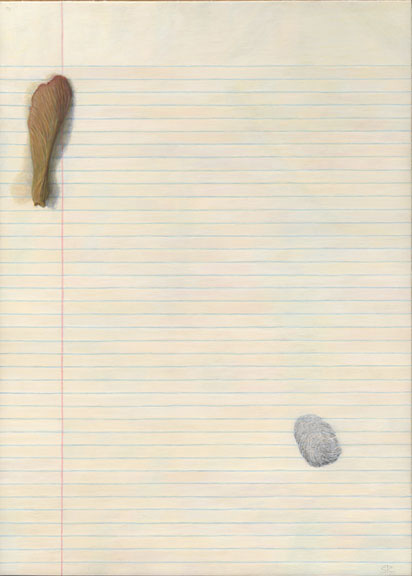 Self-Portrait, the work I found most moving, is also the clearest expression of this artist's ethos. A small brown maple seed sits in the upper left corner of a sheet of ruled paper, the blue lines painted in carefully, delicately; at the lower right corner is a lone fingerprint. The variations in hue and luminosity of the blue lines and white paper once again suggest that the smallest details are worthy of attention. And this work, together with Carrelli's others, hints at a narrative: the story of a leaf and seed collector who offers his gatherings on a bedsheet, with its suggestions of intimacy, or on lined paper, suggesting language. The maple seed isn't mounted or labeled; it's simply lain near a corner of a sheet of paper, a humble offering, just as the lone sign of human identity is a single thumbprint. Carrelli is clearly an artist who feels that one needn't collect many leaves and seeds to be fulfilled, any more than one needs to paint all of oneself for a self-portrait; both identity and transcendence can be found in a single leaf or seed.

Fred Camper is a Chicago-based art critic and writer.